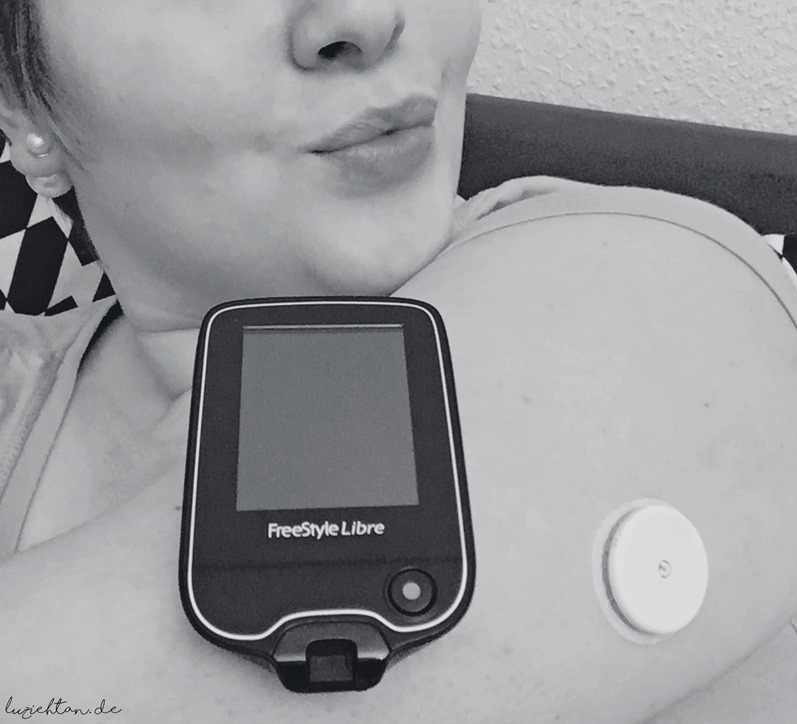 If there’s something I really don’t like about → being a diabetic, it’s the constant measuring of my blood sugar level. It’s simply annoying. Diabetes isn’t a tough disease – of course, it sucks like every other disease, especially because it’s chronic and you have to deal with it for the rest of your life, but it’s an illness that is completely manageable. It doesn’t hurt, it doesn’t stop you from doing anything and it won’t kill you – if you take care of yourself. The injections are no problem, wearing the pump is rather cool than something bad (because it’s an absolute improvement!), and as I like to say: I probably know even more about food and carbs than someone who actually wants to go on a diet or so. But there’s one thing that really sucks: measuring your blood sugar. Pricking your finger, pressing it a bit to get enough blood for the device and waiting. And then writing it down. Sounds easy and yes, it is, but after a few years this becomes something you’ll really hate from the bottom of your heart. You’ll start to forget it on purpose (well, sometimes you actually don’t do it on purpose) and enter the zone of frustration. I had this when I was 18, I just didn’t want to do it anymore. Diabetes doesn’t hurt but it’s absolutely annoying and you just can’t get rid of it, it’s always there and you can’t ever say “hey, today I’ll just spend the day like a healthy person!” because you’ll totally regret it. And even if you do this, there’s always these thoughts like “I should be measuring my BS”. You can’t switch it off.

But – and that’s the positive part of today’s blog post: there’s something new on the market. Well, it’s not totally new but still something great and I think I’ve waited way too long to get it. The FreeStyle Libre. It’s not a CGMS (Continuous Glucose Monitoring System), but a FGMS – a “Flash Glucose Monitoring System”. Means: you put a sensor on your arm and whenever you reach for it with the measuring system, it shows you your current BS – plus (and that’s an enormous plus!) you can see how your BS has been acting around it. Seeing that chart helps a lot when you want to work on your treatment – cause that’s also something you learn and have to do a lot. Your doctor isn’t always around, sometimes you just need to change some small things by yourself and if you see where the problems are, you can do it and keep an eye on it.

Here are some facts and my experiences:

The sensor isn’t bigger than a 2-euro piece and it’s pretty flat. It’s easily applied with an applicator and you can remove it just as easily with your fingers because the sticker is very good but will be loose at the edges when you have to take it off after two weeks. If you’re scared to lose the sensor, you can fix it with Kinesio tape. I did this with my first sensor because I was very afraid to rip it off. I’m currently wearing my third sensor without extra tape (on my belly, which is an experiment – according to Abbott, you should only apply the sensor at the backside of your upper arms!) and there’s absolutely no problem. But of course, this could be different in your case – every skin works differently with the sticker. My first sensor hurt a bit when I applied it and kept hurting for some days whenever I lay on it at night. The second sensor didn’t hurt at all (but bled a lot), so it probably is – as always – a game of chance like with my pump catheter: sometimes, it hurts a bit and is sensitive, sometimes I could beat it with a hammer and feel nothing at all. ;) The third one, on my belly, is a miracle without even feeling the prick when I applied it, and funnily the pump catheter I’m wearing below hurts pretty much (especially when I do some bolus) while the sensor is practically imperceptible. ;) 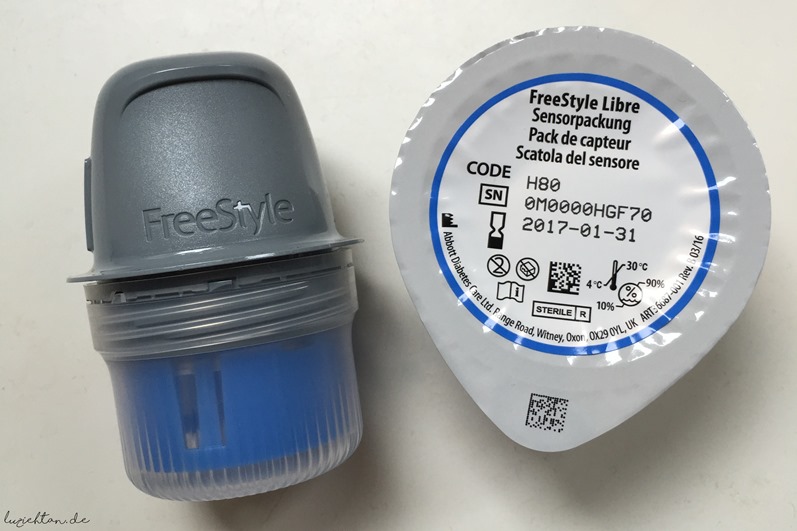 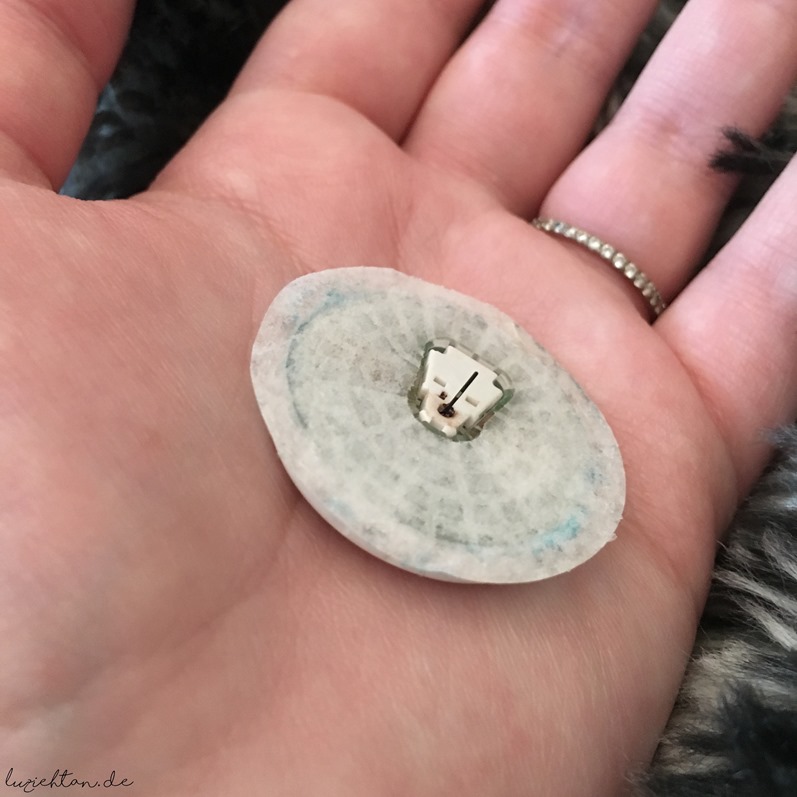 Whenever you want to know your current BS level, you just have to get near to the sensor with the measuring system and it will show you your current level plus the chart. It also shows the tendency, whether your level is constant, getting higher or dropping – and this makes it easier to decide whether you should eat some carbs or inject a bit more insulin. One of the cons is definitely that the device doesn’t give an alarm when your level is too low. I think this would be a major improvement to the whole system. The other con – if you want to measure your BS manually, you’ll either have to use another device or own the FreeStyle strips. I don’t have them, but I actually prefer measuring with a different system (in my case, that’s the Bayer Contour USB next). It will also show you the difference. To be honest, it seems like the Libre isn’t as precise as my other measuring system, but the difference isn’t too big (+/- 10 mg/dl usually), so I don’t see any problems here. An alternative: using a modern CGMS, e.g. the Dexcom system, which is supposed to be very precise, I heard. I hope I’ll be able to test this soon! 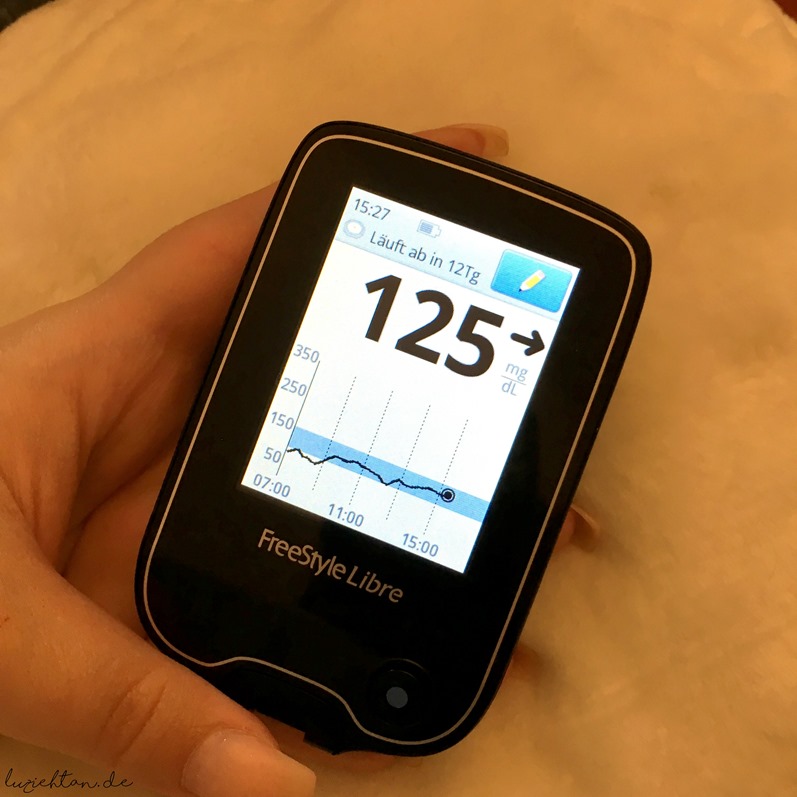 Whenever there’s a problem with your sensor (or the measuring system) – be it technical failure or for example bleeding when you apply it, you can always call customer service and they’ll provide you with a new sensor which you get for free in exchange for the sensor that caused your problems. This is a lovely service and I had the bleeding problem with my second sensor. It bleeded heavily through the little hole in the middle when I applied it and kept bleeding after every shower (it probably dried in the time between the showers). So I called them and explained my worries – I was afraid that there could be problems with the precision of measuring because of the blood. They told me that you should always change the sensor immediately if this happens, even though the friendly woman on the phone said that I can also keep wearing it if it works for me (I mean, it seriously sucks to throw away this pricey sensor after only a few days!). I then decided to take it off after a week and exchange it for the new one. Please cross your fingers that this never happens again! :) 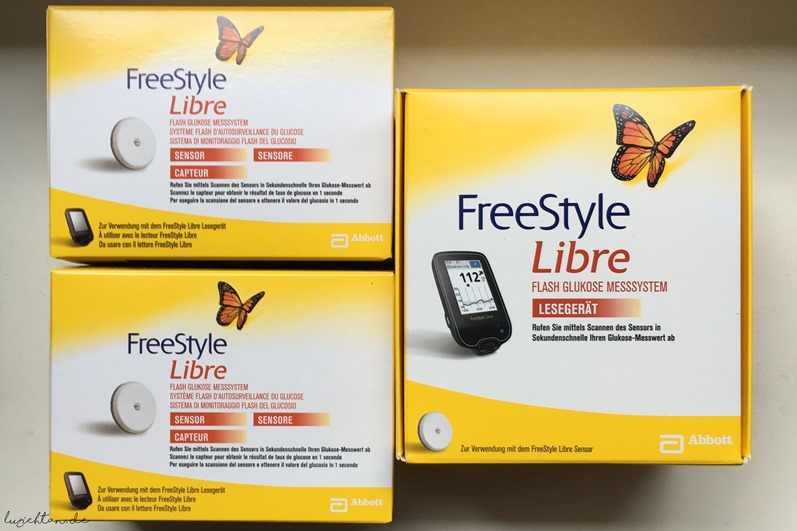 I loved using my BS diary app → MySugr while I didn’t have the Libre. To be honest, I felt that I wouldn’t have to use it anymore as soon as I had the whole chart thingy and all that information I got with it. Also, my diabetologist can easily connect the device to his computer and have a look at everything by himself. So there’s no need to keep writing down every detail. I actually miss this app a bit because it made me control my disease more when I needed it the most (talking about that frustration phase you have from time to time…). So if you don’t own the Libre yet but need some motivation – download it on your App Store. It’s really worth it!

Finally, I really want to say how much this little thing changed my life as a diabetic – checking my BS is fun now. And saying this is really strange because it has always been the one annoying task I always hated about it all. Now it’s something I like doing because I can see all details without having to “hurt” myself, without the annoying three steps. There’s more information with less action. And even though it means that there’s another “needle” (it’s teflon, so nothing about real needles under my skin) inside of me, 24/7, something that other people can see and wonder what it is, I’m extremely thankful for it. I’m already half a cyborg with my pump, as I like to say, but I happily put up with that because it makes my life easier. And I’m eagerly waiting for the “closed loop”, let’s call it the “external pancreas” – this is going to be epic. Just give me anything to attach to my body, I’ll gladly do it if it makes me forget that I’ve got a chronic disease for at least one day without regrets. And this, the Libre, is the first step. 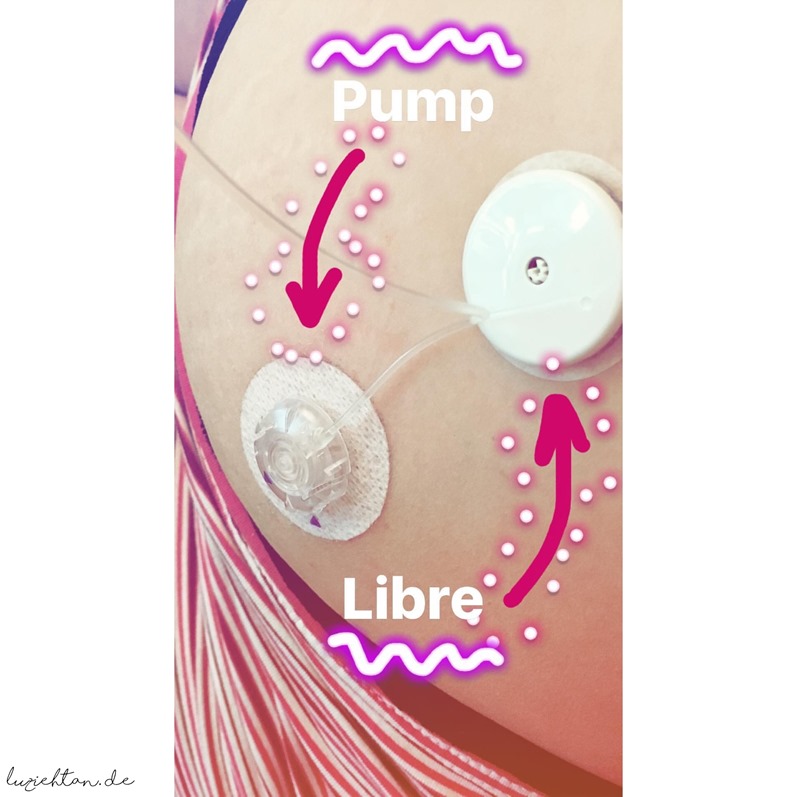