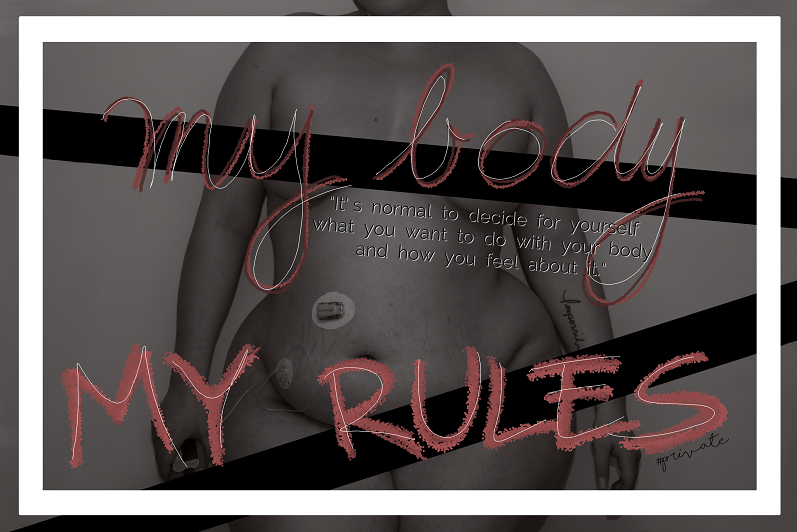 I’m not growing tired of writing these posts, repeating my message and hopefully reaching as many people out there as possible. My message consists of many parts – these are only a few:

“Love yourself. Wear whatever you want, whenever you want. Don’t judge others based on their appearance. Accept yourself and accept others. Don’t let others get you down.”

I’m currently feeling pretty disturbed by a few things that are happening. For example there was an H&M campaign not much time ago. Let’s not talk about the stupid marketing strategy (“Oh – feminism is trend, so let’s do an ad and pretend we’re cool and care about women and their rights and feelings, like working with plus-sized models but removing our plus-size selection from all our stores!”) but the reactions. I felt extremely enraged when I read the comments on diverse pages where the video was shared, especially on Facebook.
Let me just quickly explain what happens in the video: there are women. Women of all kinds, they’re different. There’s a plus model dancing in underwear in front of her mirror. A very muscular woman. An androgynous woman. Another one who cleans her teeth in the middle of a restaurant with the help of her knife as a mirror. And there’s a woman with armpit hair.

While you’d think that – as always – the fat woman will make everyone go crazy and full of hate, this time it’s the woman with hairy armpits. Because if there’s one thing that seems to be even more disgusting than a fat girl being happy, it’s hairy women. The comments I read were “gross”, “disgusting”, “unkempt” – and then there were others like: “Women need to shave themselves!”, “Hairy women aren’t sexy!”, “I’d never fuck a hairy woman!”, “I’m a woman myself and not shaving is so disgusting and not feminine!” and so on. So, the first few comments are simply stupid – why should body hair be unkempt? It’s natural! It’s actually not natural to shave. Yet we do so, cause we’re taught to do it. Some of us do it because they think it’s more hygienic. But seriously – hair isn’t “not hygienic” if you simply take a shower and wash yourself. Hair doesn’t equal smelly people. Hair doesn’t equal dirt. Body hair is absolutely normal.
But then there’s the second version of comments. They’re clearly sexist. And bullshit. And most of them didn’t even come from men. As a feminist, it makes me sad to read these words coming from other women. From those who should be supporting others. Those who know what it is and feels like to be a woman, how it is to mostly just be a body that is being judged by everyone and never good enough.

And a few days ago, I had to see the same kind of bullshit again – this time in a weird and totally stupid ad from a German online and catalog shop, OTTO, who collaborated with a well-known German designer, Guido Maria Kretschmer (whom I really don’t like because he loves to say insulting things about people in a TV show called “Shopping Queen” and everybody loves him because of that). The ad shows the designer with two dachshunds (and another woman, the main woman’s “friend”) and then the woman comes in, wearing a summer dress, twirling around and eventually throwing her arms in the air – revealing her armpit hair. The “friend” looks pretty irritated and the designer instantly comments that she should “leave the two dachshunds at home” and hands her a cardigan which she, obviously kind of ashamed, puts on as quick as possible – and they live happily ever after.

SERIOUSLY? It’s 2017 and we’re all fighting for feminism, equality, body positivity, individuality and so much more and yet there’s people thinking it’s cool to create such ads. Of course, you don’t have to think that armpit hair is beautiful, but you should accept that there are women who simply don’t want to shave just because our sexist society expects us women to be hair-free. Because it’s “not feminine enough” when we have hairy armpits or legs or arms or vaginas. Because as a woman, we are supposed to remove any unwanted hair, because it’s disgusting and not sexy. Wait? What? Who decided that this bullshit is the guideline of my life as a woman?

Some days ago I went to an amazing photo shoot with six other beautiful women and we were a happy bunch of diversity. Tall women, short women, an ombré of skin colors, skinny women and fat women (and if you want to say so – with me, even a kind of disabled woman, thanks to my diabetes, but I guess we still need to work a lot on featuring more “actually disabled” people for diversity stuff!). One of them – she’s so beautiful! – had armpit hair, and it may sound weird but it made me happy to see it. She was all “I don’t care” about it and when someone asked her about it, she told her that she hasn’t shaved since she was 15 years old. It made me happy to see a woman who’s free. Free of the oppression of what’s supposedly feminine. Free because she didn’t care. And it made me feel free too when I saw it. For a second, I thought about telling her what I felt, but then I realized: it shouldn’t be a thing. Why talk about it with someone who’s clearly decided to say “Fuck you, society – I’m doing my own thing!”? Right – there’s no need to talk about it because it is normal! Normal to decide for yourself what you want to do with your body and how you feel about it. Period.

P.S.: This also applies to many other looks of women, I just picked one of those which are obviously still used for public body shaming. Remember the Dove campaign I was part of? There was, for example, a very muscular woman – she’s absolutely great and I love how she mixes this super sporty and fierce look with cute or elegant dresses – and the comments were like “this isn’t feminine”, “a woman’s not supposed to look like this”, “this is ugly and too manly” etc. I guess there’s still a long way to go and many battles to fight against body shaming, sexism, lookism and our society’s stupid standards, but it’s so worth it and we should never stop standing up for each other! Even if we don’t choose that particular way for ourselves.

P.P.S.: About why I chose to pose naked for a public photo – yes, this time it’s definitely brave to post something like this where everybody can see me like this. It’s one big step further than just showing myself in a bikini or even underwear, but I felt like this picture was the best way to deliver today’s message. This is me, raw and unedited, in no way trying to be sexy or vulgar, just with my most private parts hidden, even though it shouldn’t be a thing to see breasts and nipples, but you know, it’s always better to keep that hidden on the Internet. ;) It actually wasn’t easy for me to decide to post this, but I kind of felt like – as with my beach body photos too – I want to be one of those who “give” you a natural body, a body that’s not photoshopped to “perfection”, a body with “flaws” like my hanging belly with stretch marks, my CGMS and my insulin pump, a fat body which is as amazing as a skinny body, as a muscular body, as a disabled body,… – just as a body. Yes, it’s scary to be online like this, but I’ve always seen my “Private” posts as a very honest and also vulnerable side of me, a side that wants to inspire others (nah, you don’t have to get naked now and post it, that’s not my intention!) because of my self-confidence and self-love, which should be absolutely natural for everybody. ♥